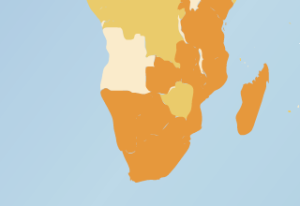 Madagascar is the island off the southeast coast of Africa

To add to recent unsettling news for the Peace Corps community, Peace Corps’s Madagascar program has been suspended due to political strife in the country. Peace Corps’s top priority is the health and safety of it Volunteers who yearly practice safety drills in case evacuation becomes necessary.

The unstable political situation in Madagascar has prompted Peace Corps to issue a statement confirming that its Volunteers serving there are safe:

“WASHINGTON, D.C., March 11, 2009 – The situation in Madagascar was tense today due to an ongoing political standoff between the President and the former mayor of Antananarivo, resulting in looting and anti-government demonstrations. Volunteers are being consolidated as a precautionary measure. Peace Corps remains in contact with all Volunteers in-country, who are accounted for and safe.

“The invitee group that was scheduled to travel to Madagascar on March 10 has unfortunately been cancelled. Every effort is being made to ensure that those scheduled to go to Madagascar have the opportunity to carry out volunteer service in another country.”

“Due to the unstable political situation in Madagascar, the U.S. Embassy has authorized departure of non-emergency personnel and family members of Embassy employees.  Additionally the Peace Corps has decided to send all Madagascar-based Peace Corps volunteers to South Africa and temporarily suspend their Madagascar program.  At this time, the embassy is encouraging non-emergency staff and family members to depart while commercial air is still readily available.  We encourage all Americans in Madagascar to monitor the situation closely and consider departing the country while commercial air is still operating normally.”

The recent news about the Madagascar evacuation and the death of a Peace Corps Volunteer in Benin, West Africa, come at a time when Peace Corps is seeing record numbers of applicants due to the recent spotlight on service on the national stage. These events are a reminder that although Peace Corps strives for the perfect safety of each Volunteer, the agency and its Volunteers still operate out in the world where bad things happen, just as they do in the United States.