For a course in training needs assessment, I have been researching the career transitions needs of AmeriCorps members in Oregon the past couple of months. 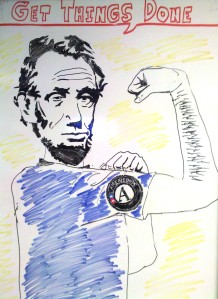 The pilot study focused primarily on career pathing and networking — skills, attitudes, and performance needs. It’s interesting what is rising to the surface.
abcdef
The first thing that jumped out at me in general was that members are thinking about their post-AmeriCorps plan far earlier than I had anticipated. 81 percent were thinking about next steps by Day One of their term. I was thinking the majority would hover around the 6-month mark, once they got a handle on their service project.

A paradox emerged from the data on networking. The majority of members who responded to the survey rely on networking (with people more established in their careers, as well as with friends and family members) as their top strategies for investigating next steps.
abced
However, the vast majority of members also find networking problematic in a range of ways — from not knowing whom to network with, to feeling like they are bothering the people they want to network with. In fact, only 24 percent of members said networking was unproblematic for them.
abcd
Strikingly, networking skills correlate with a more positive attitude toward the transition. For the 24 percent of corps members who find networking unproblematic:
I’d love to know whether people with a good attitude towards their next steps also happen to have a good attitude towards networking — or if there’s a causal relationship (in either direction) among the two.

The other skill area I looked at included career pathing. I started by looking at survey results for people who report having their plans “firmly in place” — but the arc of their responses for all other questions looked really similar to overall responses.
abcdef
For people who are thinking primarily in terms of the role or job function they’ll play:
What’s fascinating to me about this set of numbers is that if I just look at people who are planning to get a job after the corps, a huge number are anxious (72 percent for job seekers overall; 54 percent for those focusing on their professional role) or at least uncertain (64 percent for job seekers overall; only 45 percent for those focusing on their role).
abcd
abcd
On the other hand, among members who are focusing more on the issue they care about in their career:

It appears that focusing on the role you’ll play in the workforce ain’t a bad strategy — at least if attitude is a good indicator. It may be that when you focus on role, you’re relying more on yourself and leaving less to chance or others.
abcd
Literally, this group relied relatively less on networking (though they did network!), more on reflecting on their own strengths and weaknesses, and took advantage of a wider variety of career resources available.
abcdef
An area for further investigation is, do the frequent opportunities for in-service training offer additional benefits to people entering their career through the lens of role? — because training is often more tied to specific job skills (like grant writing, for VISTAs) than issue.
abcdef
These initial findings are really tempting me to keep researching (beyond the scope of my class).
abcdef
Happy AmeriCorps Week, by the way!

One thought on “Graduating AmeriCorps Members and Career Transition Needs”