An interview with Colleen O’Connor, an exiting Lutheran Volunteer in St. Paul, MN.

Tell me about your program – Lutheran Volunteer Corps (LVC). How is it different from AmeriCorps or Peace Corps? Why did you choose it?

What makes LVC different from many AmeriCorps programs is that LVC is meant to be a holistic, whole-life program. LVC isn’t just about our job; it encompasses the rest of our lives, as well. I live with other volunteers in an intentional community, participate in retreats and social events, and am asked to explore social justice, community, spirituality, and simplicity. In some ways LVC is definitely more restrictive because I can’t always do whatever I want with my out-of-work life.

I am asked to spend weekly time with my housemates, attend trainings and retreats, and not have an outside job or class for credit. But this is also why I chose LVC, because I wanted to live in community and really get everything possible out of this experience.

There are other similar programs (such as Jesuit Volunteer Corps and Mennonite Volunteer Service), but LVC is one of only two such programs in the Twin Cities, and I knew I wanted to be here. The other (the St. END_OF_DOCUMENT_TOKEN_TO_BE_REPLACED

In honor of AmeriCorps Week, I’m interviewing people who are current or former AmeriCorps members, to talk with 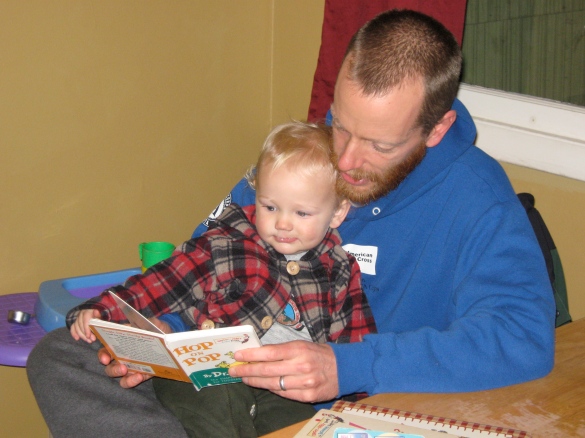 them about their service, and its impact on their communities and their careers. This interview is with my husband Doug. We met in 2000, during his second AmeriCorps year with Notre Dame AmeriCorps.

Where did you serve?

What do you do now?

I teach fourth grade at an elementary school where most kids are from low-income, limited-English families. This is my fifth year at my school.

You studied fine arts and painting as an undergrad, but you started AmeriCorps several years after END_OF_DOCUMENT_TOKEN_TO_BE_REPLACED

In the world of national service, spring and early summer is prime time to apply for open positions—most of which will start this fall. In the coming weeks, The New Service blog will bring you details about a variety of programs that are currently recruiting. To find more program introductions, also check out the “Service Corps Programs” category in the pull down menu in the left-hand sidebar of this blog.

A cohort of 30 young people, representing many faiths, raise awareness and resources to fight deaths caused by malaria.

Recognizing that religious pluralism can either be a source of conflict or cause for cooperation, many groups around the world strive to bring young people of diverse faiths together—to act on the values their faiths hold in common. Serving together deepens the faith commitment of each person, while also enabling each to see another perspective.

The disease kills over a million vulnerable people every year, mainly young children and women in Africa. It costs Africa over $12 billion a year in health costs and lost productivity, making poor countries even poorer. Worldwide, there are more than 350 million malaria infections each year. More than 1 million of these cases end in death; others scar their victims for life with permanent brain damage.

Fellows come from the United States, the United Kingdom, and Canada. They train for two months in London, Chicago, and with primary health care partners in Africa — and then return to their home countries for 8 months of full-time, stipended service.

Fellows serve in faith-based organizations that also work on malaria-related issues. From the website:

Fellows will accomplish this primarily by doing outreach presentations and workshops for young people and their allies in local faith communities, including congregations, faith-based schools and religious or inter-religious student groups at local universities. Following their initial presentations and workshops, the Fellows will provide counsel and additional training to each active group as they enact their ideas, helping to ensure collective success in inter-religious partnerships and in raising awareness and life-saving funds.

The application is due January 15.

If you are interested in helping out but can’t apply to become a fellow, here are some other ways to get involved with the Faiths Act Campaign. Also check out the interfaith social network Bridge Builders on Ning, operated by the Interfaith Youth Core.

To learn more about the interfaith youth movement, check out the work of the Interfaith Youth Core based in Chicago, and read its founder Eboo Patel’s memoir Acts of Faith: The Story of an American Muslim, the Struggle for the Soul of a Generation.

* Photo above taken from the Tony Blair Faith Foundation, and copyright Lucas Foglia.