While the Corporation for National and Community Service — the agency that coordinates and oversees the AmeriCorps family of service programs — had a disappointing day in a House subcommittee yesterday, Peace Corps won a huge increase in funding as its supporters in the House defeated an amendment that would have only moderately increased funding for the agency in the fiscal year 2010.

The increase — if matched in the Senate — would mean Peace Corps could start ramping up Volunteer numbers, as Obama has called for doubling Peace Corps by the agency’s 50th anniversary in 2011.

According to the National Peace Corps Association’s blog the Peace Corps Polyglot: END_OF_DOCUMENT_TOKEN_TO_BE_REPLACED 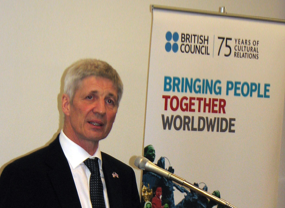 Amy Potthast first wrote about the British Council’s event and because I live in the nation’s capital, where the event was held, I had the good fortune of attending.

Admittedly, I was still reeling from Michelle Obama’s visit to CNCS — so the British Council event was yet another highlight on my calendar which made that week unforgettable, to say the least.

An impressive crowd gathered—approximately 50 attendants—at the Rayburn House Office Building for what was absolutely a lovely affair.  Lovely is not a word I usually use to describe a professional engagement, but I think this word comes to mind because of my British, or as I say, Bree-teesh, bias. Yes, I’m a sap for their accents and covet their seemingly inborn urbane manner.

Prior to the event, I was only loosely familiar with the work of the British Council—the United Kingdom’s international END_OF_DOCUMENT_TOKEN_TO_BE_REPLACED