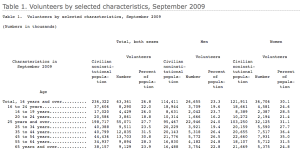 Volunteering up again, slightly, in 2009.

This week the Corporation for National and Community Service announced that a new Bureau of Labor Statistics report shows that 1.5 million more people in the U.S. volunteered in 2009 than in 2008.

The number of people volunteering through organizations rose from 61.8 million to 63.4 million between September 2008 and 2009.

The survey — conducted with the help of the Corporation — asked 60,000 households about their volunteerism habits through a supplement to the September 2009 Current Population Survey (CPS). The Corporation will use this week’s BLS findings to produce the annual Volunteering in America report. (See my write up about the 2009 report from this past July).

Between September 2007 and September 2008, the number of volunteers increased by one million. In the fall of 2008 the U.S. economy started its dramatic nosedive which definitely increased the need for volunteers at social service organizations throughout the country.

Interestingly, though, it doesn’t look as though unemployed people are the ones who swelled the ranks of volunteers. END_OF_DOCUMENT_TOKEN_TO_BE_REPLACED