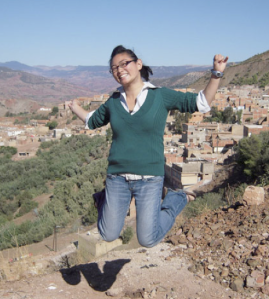 This week, Peace Corps announced the death of a young Peace Corps Volunteer serving in Morocco.

The 23-year-old So-Youn Kim — a 2007 Stanford grad — passed away Monday, November 16th, after an illness. The announcement from Peace Corps doesn’t specify the illness, and says the exact cause of death is unknown. She was about half-way through her term of service as a youth development worker in Tamegroute, a small village within the Zagora province of Morocco.

This Saturday, the Peace Corps community in Morocco will hold a memorial service for the young Volunteer.

From the blog of fellow Peace Corps Morocco Volunteer Joy:

Monday night, I received shocking news that So-Youn Kim, a YD volunteer who arrived with my staaj (training group), passed away unexpectedly. I only briefly knew her. She had a fiery spirit, that was both polarizing and admirable. This past month, she organized two well-received pottery workshops. My heart ached not being able to attend. My heart aches for her passing, her community (both in Morocco, Peace Corps and the States) and her family.